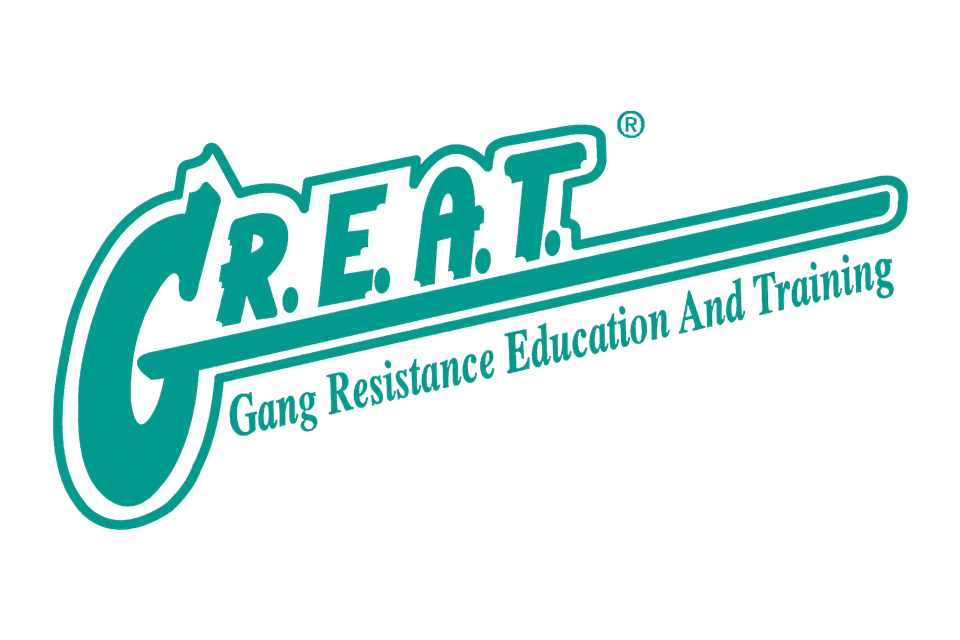 The Gang Resistance Education And Training (G.R.E.A.T.) Program has been building trust between law enforcement and communities for almost 30 years.  G.R.E.A.T. was designed as an immunization against delinquency, youth violence, and gang membership for children in the years immediately before the prime ages for introduction into gangs and delinquent behavior.  G.R.E.A.T enables law enforcement and youth to build positive relationships throughout the course of the Program.

G.R.E.A.T.’s goals are to reduce risk factors and build protective factors that help prevent gang involvement for participating youth.  When children are influenced to participate in criminal activity, to use violence as a means to an end, or to become members of gangs, there is a significant cost for everyone involved.  First, there is a cost to the individual child, who has to live with the constant fear of arrest, the reality of being held accountable, and the knowledge that those who live by violence often die by violence.  There is a cost to victims of crime, who suffer real, and sometimes irreparable, personal loss.  There is also a cost to society—not only the cost of the damages done, but the loss of positive contributions that affected citizens could have made.  So if we can keep children from starting down the wrong path, it is much less costly, and far more effective, than trying to redirect them after they have already gone astray.  The story below, recently received from Memphis, Tennessee, police officer and G.R.E.A.T. instructor Cassandra Leake, illustrates how the G.R.E.A.T. Program can transform a young person’s life.

Jacqueline was a seventh grader at Georgian Hills Middle School, where she participated in the G.R.E.A.T. Program during the 2005–2006 school year and attended our 2006 G.R.E.A.T. Summer Camp.  I remember Jacqueline as a difficult, disobedient seventh grader.  Jacqueline’s father had died recently, which contributed to her rebellion and lack of trust of others.  The transforming experience for Jacqueline happened during her time with the 2006 G.R.E.A.T. Summer Camp.  Change did not happen overnight.  She continued to struggle with occasional outbursts of anger, but she was headed in the right direction, slowly but surely.

Fast forward to the summer of 2016, when I received a call from a fellow police officer who had met Jacqueline.  She had been asking every police officer she came in contact with if they knew me.  She finally found one who did, and Jacqueline and I arranged to meet for lunch.  What a precious time we had catching up on our lives over the past 10 years!  Jacqueline was no longer an angry young teenager—now she was a beautiful, confident, and full-of-life 23-year-old woman with goals to go to college!

Jacqueline started college at Tennessee State University in the fall of 2016, where she recently finished her bachelor’s degree in human performance sports science.  We have remained in touch over the past four years; meeting for lunches, FaceTime chats, texting, and even spending Thanksgiving together at my house.  What impresses me the most about Jacqueline is her triumph over adversity.  She didn’t let her negative past circumstances dictate who she would become as an adult.  We can look back now and laugh about the rebellious young teenager she was as we celebrate the strong, confident, and motivated 27-year-old woman she has become.  Jacqueline will readily admit that, had she not participated in the G.R.E.A.T. Program all those years ago, she doesn’t know where she would be today.”

This story is a great example of the kinds of ancillary effects reported from the national evaluation of G.R.E.A.T. conducted across the United States from 2006 to 2012.  The study not only found that Program graduates had significantly lower rates of gang membership than their counterparts who had not participated in the Program, but also documented several other notable effects, including more positive attitudes toward police, less positive attitudes about gangs, more use of refusal skills, less rationalization of resorting to violence to resolve problems, less anger, higher levels of altruism, and less risk-seeking.

G.R.E.A.T. works through police officers because they are in a unique position to understand the consequences of delinquent behavior, violence, and the lure of gangs.  Police officers make credible role models for children on these issues.  As officers go into school classrooms and work with children in their daily environment, the children learn to see officers as real people who care about them.  They begin to see officers as friends and protectors instead of as people to be feared.  And just as this process makes officers relatable to the children, it endears the children to the officers.  G.R.E.A.T. officers tend to develop more empathy, better communication skills, and more of a sense of connection with the people they serve.  We can never arrest our way out of the problem of crime.  However, with effective early instruction and improved relationships, we can reduce the number of children drawn into criminal behavior.  The G.R.E.A.T. Program is a proven vehicle for developing relationships with children and youth that can transform lives and communities.